Skip to content
Home
/
Articles
/
Tracking Antimicrobial Resistance: Down on the Farm
April 24, 2018

In the summer of 2016, Pipestone set forth the challenge to be global leaders in antimicrobial stewardship. As swine veterinarians, we feel a responsibility to lead the industry with science-driven decisions on how to manage the use of antimicrobials, track resistance, and make proactive changes to practices if increased resistance was shown. With that in mind, we crafted  PART (Pipestone Antimicrobial Resistance Tracker), a tool to measure antibiotic use on the farm, as well as to track antimicrobial resistance (AMR) across veterinary pathogens, over time.

A few things became very clear to me as I contemplated my approach:

To help answer, we collaborated with the Veterinary and Biomedical Sciences Department and Food Safety Microbiology Laboratory at South Dakota State University (SDSU) to craft a protocol to sample both live animals prior to marketing and their environments. In addition, we mimicked the exact antimicrobial susceptibility panel used by NARMS, so we could start to track resistance patterns across the 4 bacteria. Now that we had a set of nationally-accepted standards and a validated sampling protocol we could go to work. I can’t thank everyone at SDSU enough for all their expertise and help with this important project! 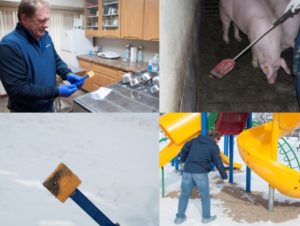 To make a long story short, our methods have proved to be accurate and repeatable, not only in swine environments but across alternative environments, such as human wastewater treatment plants, playground dirt and companion animal facilities. We can routinely detect our 4 NARMS bacteria and determine their level of AMR. For third-party validation, we have also worked with Drs. Jonathan Frye and Charlene Jackson from the USDA-ARS lab in Athens, GA (who helped set up the original NARMS standards) to determine whether a report of resistance from the SDSU VDL is indicative of the presence of a resistance gene. In other words, if the lab says bacteria are “susceptible” or “resistant” to a specific antibiotic, is it true? Short answer= Yes!