“Without data, you are just another person with an opinion”
-Edwards Deming

I think in numbers, as most people in the sciences do.  As such, I believe very strongly in the value of data to make decisions.  Being able to base business decisions off solid numbers gives confidence to the decision-maker that they are making the right move.  Conversely, making decisions off poor-quality or inaccurate data, can create just the opposite effect, and lead to poor decisions.

In any typical grow-finish system, you can become quickly overwhelmed with data.  Nursery, finishing, marketing, and financials are all streaming into the system simultaneously.  In addition, finishing data can take 6 months or more to show a result because you don’t have complete data until a group is closed, many times months after the original change.  Tracking production data in real-time is a valuable tool that allows you to see the results of changes more quickly.  It can also catch problems faster and allow you to intervene before things go askew.

Drawing conclusions from raw data and creating lasting positive changes isn’t easy, particularly in a biological system, like pork production.  Here are three things that I believe help to make it possible.

Benchmarking your data to others allows you to put your data into context.  If you have 5 different sites that all have a 1.5 average daily gain, you may not think there is anything to change or gain, but if you compare your data to a larger database, and find that the average is a 1.6, you may realize that you have a lot to gain by instituting changes to your system.  Benchmarking should be done at all levels.  Comparing barns or sow farm sources within a single producer is valuable, as is comparing several producers within a single sow farm source.  Taking off blinders and not allowing yourself to give excuses for poor performance can be hard, but well worth it for the future of your farming operation.

Putting a dollar value to your data can really help to get a person’s attention; whether that be the owner, manager, or barn personnel.  Everyone understands dollars.  Dollar valuations can be put on almost any criteria – gain, feed conversion, mortality, sort loss, market price, percent full value pigs.  A local shareholder was really struggling with how to financially justify bringing a son back to the farm.  When shown that the value of changing their current 2.7 feed conversion to a 2.6 could result in an additional $3/pig, and almost $60,000 worth of additional income, the decision became easy.  The son returned to the farm, focused on improving the family’s home mill and wean to finish system, and feed conversion improved.  Putting a value on the additional gain captured from a wet-dry feeder is another example of using dollars to justify spending dollars. Return on investment is something that is easy to understand and can help justify capital improvements that lead to better performance and better bottom lines.

The problem with creating lasting positive change can many times relate to not getting the barn personnel to “own” the change.  How can they own it if they do not know it?  Getting data back into the hands of the person in the barn day to day is the key to making changes.  With a quick glance, they should be able to get the key points they need from any report.  They need to have access to data, be trained as to the value of the differences between themselves and other barns or producers and be given the tools and resources to affect change.    Then, they need to have regular, recurring feedback.  One way in which barn personnel can have immediate financial impact is in sort loss.  There can easily be $8/pig difference in lost opportunity from the best to the worst producer.  Correctly hitting target weights and sorting well around those targets can translate into thousands of dollars for the farm and can be truly affected by the person at the barn level. 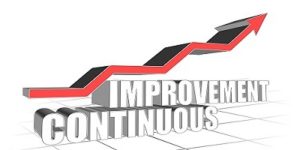 Manipulating data is more than creating pretty charts.  Ask anyone with a pile of soil and yield maps collecting dust in a drawer.  The goal is to turn raw data into information that can be used to make informed decisions that improve the bottom line.  Benchmarking that data, putting a dollar value to the advantages (or disadvantages) and getting that data into the hands of the person that can truly affect change are key tools for creating positive lasting change.

For questions about record keeping and getting the most out of your data, reach out to the Carrie Pollard or anyone on Pipestone Grow Finish team at 507-825-7053 or carrie.pollard@pipestone.com or growfinish@pipestone.com.